My Dad, the Winemaker

My Dad was born in Palermo, Sicily in 1892. He came to America around 1912 by way of Ellis Island, New York. He settled in Philadelphia. He worked at several jobs, starting out by working on the railroad. I think he had a small produce store for a while. Later, he got a job in a large hotel laundry and worked his way up to manager. The hotel was the Philadelphia Ritz Carlton. He spent quite a few years there but later moved on to become the manager of the laundry at one of the University of Pennsylvania Hospitals, the Graduate Hospital. Pretty much from the beginning he settled in South Philadelphia in a section called Little Italy. He married and had four children, all boys.

As it was with the Italians, it was a yearly ritual to make your own wine and make enough for the whole year. I remember it was near the end of October around Halloween when he would go to 9th Street where the small stores and push carts would line the street and sell their produce. That was where he would buy the grapes in 30-lb boxes. He would buy 14 or 15 boxes and that would be enough to make about 30 gallons of red wine, referred to as 'deggo red'. One or two of the boxes would be the dark alogonta grape. The rest were all white grapes. When he selected the dark grapes, he would make sure that they were dark grapes and not just dark skinned grapes. He would smash one grape on the wooden crate to see if the grape stained the wood. The grapes by this time would be be real ripe to the point that they would be sticky and sweet. 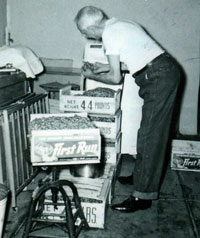 The boxes of grapes would then be delivered to the side alley of his house where we would pass them through the basement window. Now the good part! We could eat as many grapes as we want before the wine making begins!

Weeks before this he would prepare the barrels by filling them with water and let them soak to make sure the wood would swell and tighten the seams to seal the barrel. If he bought new barrels they would be once used whiskey barrels, probably those used for Bourbon.

The first step was to set up two barrels on end with the top end removed. Place the grinder on top of one and grind grapes until one barrel is about two thirds full. Do the same to the second barrel. You now have two barrels each two thirds full of ground up smashed grapes, stems and all.

He would then cover both barrels with a heavy cloth cover and let it stay for about a week or ten days. During that time you could hear and smell it ferment.

Now there is a third barrel that will be used to store the new wine. This barrel must be placed on its side with the bung hole up and in the location where it will stay permanently.

The next step is to press the remaining mash in the two upright barrels to squeeze all the remaining grape juice out. The wine press is a large wooden caged device with a metal trough at the bottom and a large jack screw in the center. On the top of the jack screw is a large ratchet type assembly that can be screwed down on the mash to press out the rest of the juice. As the mash is compressed you have to add the half circle spacers so that the jack handle can clear the top edge of the press.

When all the grape juice is squeezed from the mash and placed in the permanent barrel, the stopper on the bung hole is placed loose on an angle to allow the gases to escape.

It remains this way for about a month. After that time, it is driven in with a hammer and left sealed until next year. 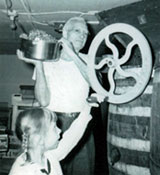 Now it is time to drink the new wine. My father would send me down the basement with an empty bottle and instruct me to draw wine from the lower spigot but make sure I open the air valve at the top. He did not want an air bubble to suck back through the spigot into the wine.

At every evening meal there would be a bottle of wine and a glass for my father and a little glass for me. That goes back as far as I can remember. 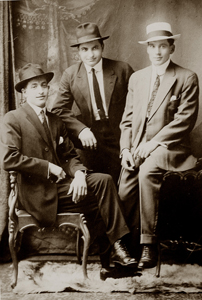 Picture of my Dad taken in 1912. He is the one on the far left. His brother Antonio is in the middle. The person on the right is Luigi Secreto, Dad's brother-in-law. This picture is featured on the front of MillaNova's Mafia Merlot.